What is this thing in your yard?

It’s a Bennett model 646 gasoline pump, built in December 1950. These pumps were very common at gas stations in the 1950s.

The pump has been converted to hold an electric car charger. The gallons and price display have been restored to working condition, and a tiny computer turns the original gears to make the display show how much electricity the car has used. The “gallons” are actually kilowatt-hours, and the sale price shown is the actual cost of that electricity.

Why is it here? 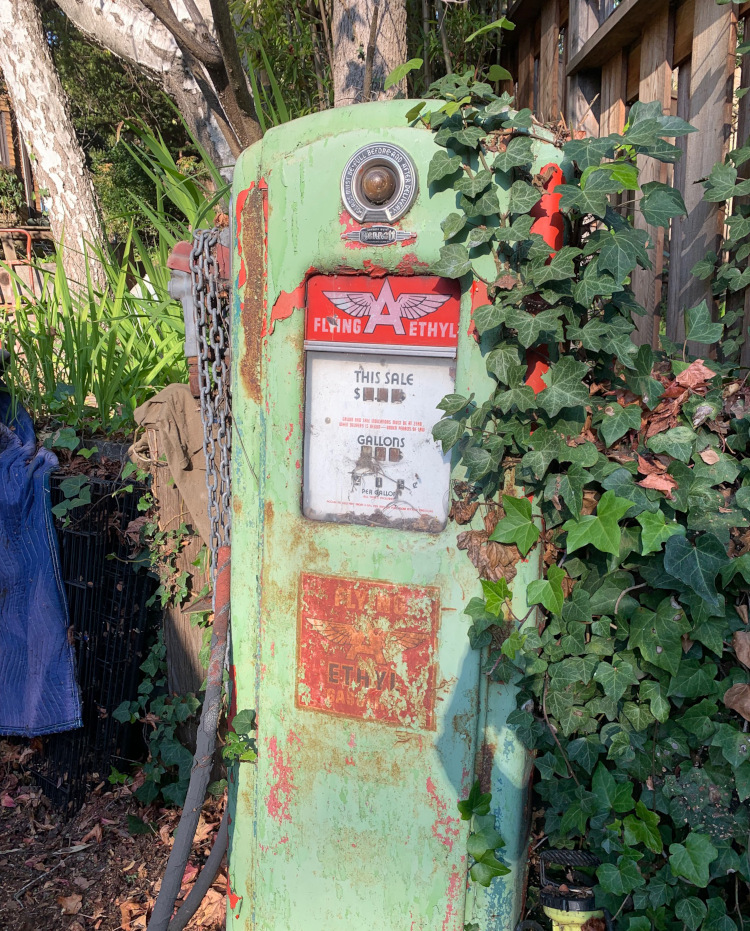 I needed something to attach a new car charger to, so I bought this old pump that had been sitting unused in a nearby Berkeley yard for a few decades. At first the idea was simply to put the charger in the shell as a piece of yard art, but it seemed like an interesting challenge to get the original display working properly.

“Flying A” was the primary brand of Tidewater Petroleum Company from 1926 to 1966, and was a common gas station in the Bay Area. (There are still a few “Flying A” stations in Marin.) Coincidentally, the grandfather of one of the owners of this house worked as an accountant for Tidewater Petroleum in Martinez.

This pump accumulated at least 6 different layers of paint over the years, but the original logo you can faintly see is for “Flying A”. The silkscreened glass logos are modern reproductions of the (broken) originals.

“Ethyl” referred to gasoline with tetraethyl lead additives (“leaded gas”), which turned out to be a bad idea. The old “CONTAINS LEAD” warnings were missing when I bought it, so I replaced them with new “CONTAINS ELECTRONS” signs in the correct style.

How do the gallon and price display work?

When I got the pump, everything was completely seized up (as you’d expect for something untouched for 40 years). I removed (and saved) the gasoline-specific parts to make room for the car charger, but left the broken display unit (the part that shows gallons and dollars) because it looked interesting.

Then I found you can buy original display units from people who completely restore them, which is quite a task — here’s a diagram of the parts: 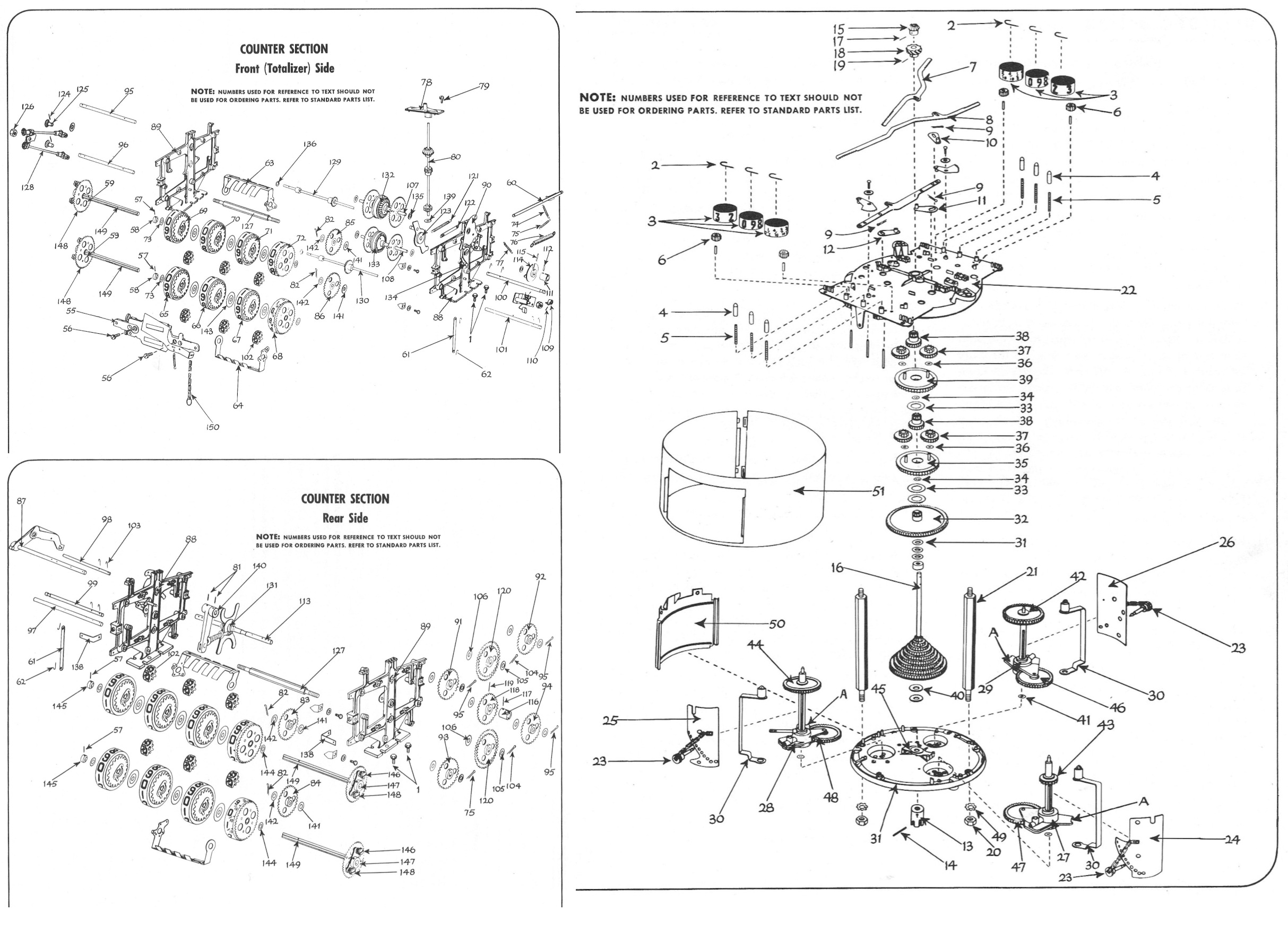 I bought a restored display unit, then used that as a guide to get the original display unit working, too. This required the application of large amounts of WD-40 and careful whacks with a mallet and screwdriver over several weeks. There are now two working display units for this pump, one of which is a spare.

Once the display wheel gears could be turned by hand, I added a motor designed for robotics projects to turn the gears. An Arduino Uno microprocessor uses a sensor to measure the varying current drawn by the charger, then uses a motor controller to turn the dials a tenth of a “gallon” worth whenever the car uses 100 watt-hours. 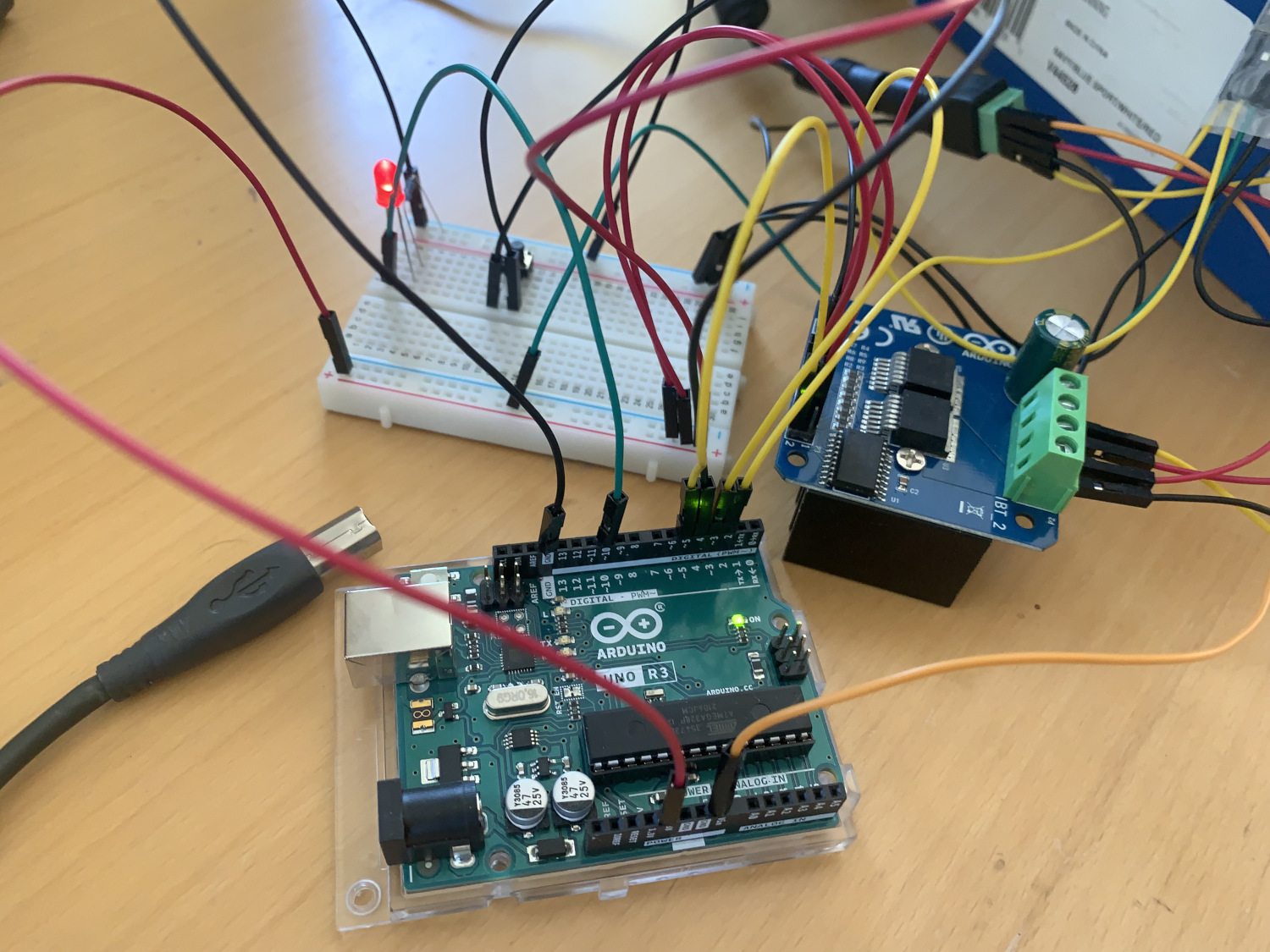 This turns out to be a little trickier than you would expect, because despite all the WD-40, the gears have several tight spots that require additional motor power to push past — but applying that much power all the time makes it spin far too quickly. So the Arduino monitors the actual speed of the motor hundreds of times a second and varies the power to ensure it keeps moving… but as slowly as possible.

The pump has a bell that makes a loud, satisfying ding! for every “gallon”, but it’s muffled with a rag for the neighbors’ sanity.

The “gallons” (kilowatt-hours) and dollar amount you see are the amount of electricity consumed since the last time it was reset to zero by turning the hand crank on the side. The price per “gallon” is the PG&E price per kilowatt-hour of electricity; by happy coincidence, that number is roughly the same as gas prices in the 1950s.

Here’s a video of the dials turning (click to play):

Do you have more pictures?

There’s some more pictures in this photo album.

How expensive is it to drive an electric car?

Our little blue Chevy Bolt uses about 7 cents of electricity per mile. An equivalent 30 mpg gasoline car uses about 16 cents of gasoline per mile at $4.50 per gallon.

Put another way, driving an electric car — even with relatively high PG&E electric rates — is like paying $2.10 a gallon for gas. A 250-mile “full tank” costs about $17.50. (Sadly, I wasted all the savings by buying and restoring an antique gas pump.)

We’re sometimes asked if it’s inconvenient to wait for the electric car to recharge, but we never drive it more than 250 miles in a day (we drive our plugin hybrid van for those trips), so it “fills up” at night by itself, which is more convenient than even a quick gas station visit. It’s nice to have a “full tank” every morning.

(We actually set the charge to finish at 9 AM, which in the summer means it uses excess solar power available in the early morning on the California grid.)